Many pharmacological properties of conventional (“free”) drugs and genes can be improved via drug delivery systems (DDS), which include particulate carriers composed primarily of lipids and/or polymers. Nano-DDS are designed to alter the pharmacokinetics (PK) and biodistribution (BD) of their associated drugs and/or to function as drug reservoirs (i.e., as sustained drug release systems). Sterically stabilized (‘stealth’) NP, with a ‘cloud’ of hydrophilic chains at the particle surface PEG chains, have long circulating time. A further required improvement is targeted DDS (“smart” DDS). Targeted drug delivery transports the therapeutic agent to a patient’s diseased tissue with high specificity that increases the concentration at the site of action and spares the normal tissue. The goal of a targeted drug delivery system is to prolong the half-life, localize the effect, and have a protected drug interaction with the diseased tissue, while minimizing or avoiding side effects. We have developed polymeric/lipoid based targeted NP. As depicted in the scheme, liposomes are targeted by unique and specific ligands (peptides or small molecule drugs). We have studied several targeting approaches to peripheral neurons, or to epithelial cells/the extracellular matrix (ECM) and its sub-endothelial basement membrane (BM). 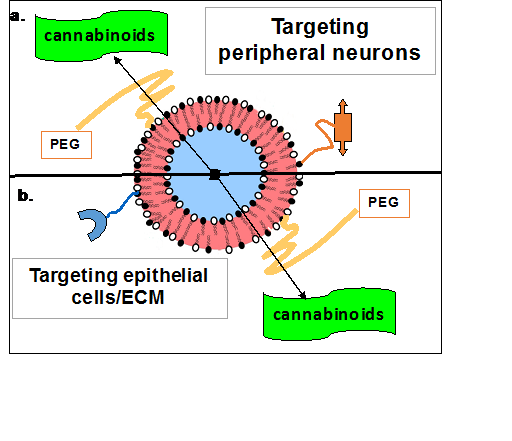 There are two main subtypes of cannabinoid receptors, CB1 and CB2. The CB1 receptor is expressed mainly in the CNS, but also in the lungs, liver and kidneys. The CB2 receptor is expressed mainly in the immune system and in hematopoietic cells. Since several highly active cannabinoids are associated with psychotropic effects, we suggest to encapsulate cannabinoids in targeted delivery systems, which will circumvent CNS effects. This will enable specific therapy of several disorders associated with peripheral neurons, or various vascular diseases and cancer with exposed ECM. In addition, our studies would contribute to better understanding of the pathways of effect of cannabinoids/endocannabinoid axis in diseased tissue and facilitate more selective pharmacological tools.