Hyperglycemia, inflammation and proximal tubular dysfunction contribute to the pathogenesis of diabetic nephropathy (DN), the leading cause of end-stage renal disease. Yet, the exact molecular signaling pathways underlying the development of DN are largely unknown. The endocannabinoid (eCB) system is critically involved in the onset of DN and globally-acting cannabinoid-1 (CB1) receptor antagonists were found effective in attenuating the development of DN and improving renal function. However, this treatment approach is no longer valid due to increasing centrally-mediated psychiatric side effects observed with rimonabant, the first-in-class commercially available CB1 inverse agonist.

My recent work has demonstrated that peripherally restricted CB1 antagonism may represent a novel approach to treat obesity and its related diabetic abnormalities without causing CNS-mediated side effects. Here, we propose to uncover the role of CB1 in the renal proximal tubular cells in the pathogenesis of DN, and the therapeutic potential of its blockade by peripherally restricted CB1 antagonist for the treatment of DN.

Our general hypothesis is that overactivation of the eCB system targets proximal tubular CB1 receptors to increase proteinuria, inflammation and nephropathy, leading to DN. The rationale for the proposed research is that understanding the contribution of the eCB system to the development of DN has the potential to translate into better understanding of the causes of the disease and identifying potential mechanisms that can be targeted for therapy.

During the last few decades, there has been an epidemic increase worldwide in the prevalence of obesity and its metabolic and cardiovascular disorders. In addition, obesity has been increasingly recognized as an independent key factor in the development of renal complications, yet the underlying signaling pathways are not fully understood. Cannabinoid type-1 (CB1) receptor plays an important role in the onset of nephropathy associated with diabetes, and globally-acting CB1 receptor antagonists were found effective in improving renal function.

In this project, we propose to uncover the role of CB1, specifically in the renal proximal tubule, in obesity-induced renal dysfunction. Our general hypothesis is that increased activity of the renal endocannabinoid (eCB) system in obesity targets CB1 receptors in the renal proximal tubular cells (RPTCs) to promote RPTC dysfunction, and thus may contribute to the development of obesity-induced renal nephropathy.

To test this hypothesis, we will determine the metabolic and renal phenotypes associated with high-fat diet-induced obesity in a novel mouse strain that lacks CB1 receptors in the RPTCs. The rationale for the proposed research is that understanding the contribution of CB1/eCB system to the development of obesity-related kidney dysfunction has the potential to be translated into better understanding of the causes of the disease, and identifying potential mechanisms that can be targeted for therapy. This could support the development and clinical testing of pharmacological strategies, such as peripheral CB1 receptor antagonists for the treatment of not only obesity per-se but also to its related renal complications. 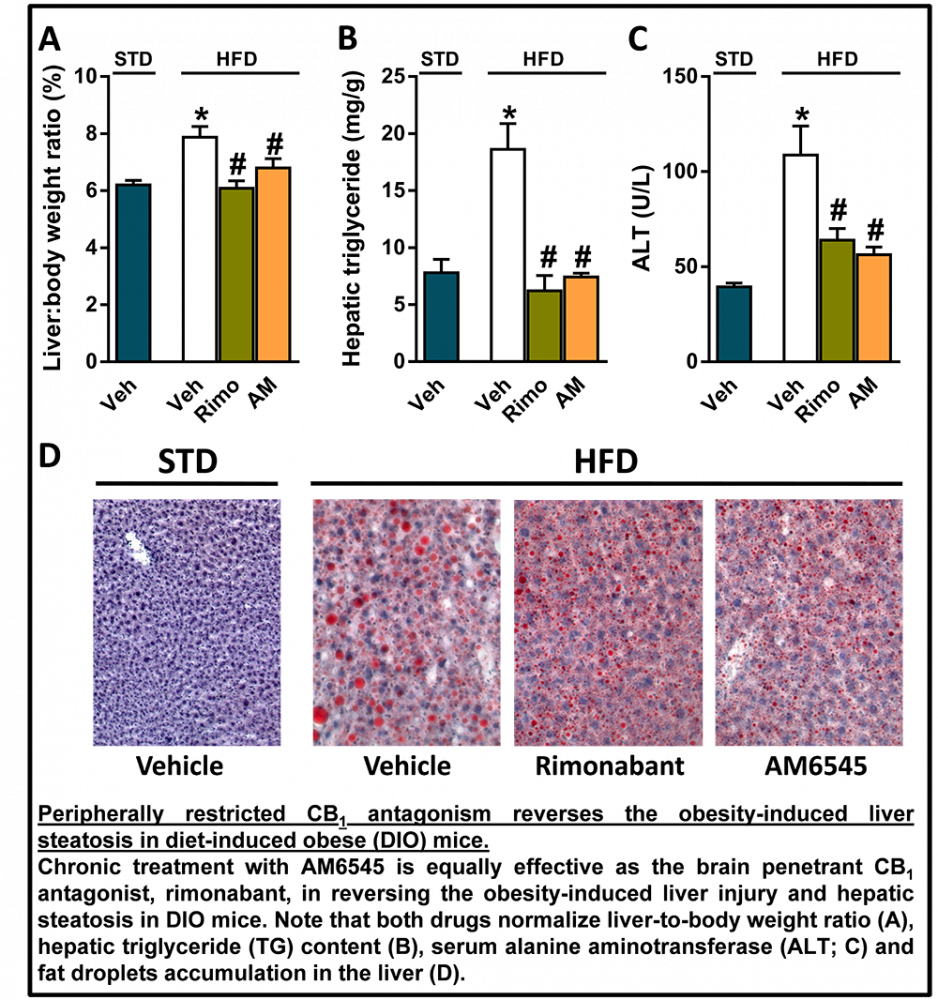 Beta cells operate an hormetic mechanism to alleviate cytotoxic effects of free fatty acids. We have previously discovered that both high glucose and increasing palmitic acid levels induce substantial remodelling of membrane phospholipids and alter the relative abundance of saturated-, mono-unsaturated- and poly-unsaturated fatty acids. We aim at investigating the impact of the transformation of arachidonic acid into endocannabinoids under hyperglycemia and hyperlipidemic conditions. We have already reported that both conditions increase PLA2 activity and the hydrolysis of arachidonic acid from membrane phospholipids. Peroxidation of arachidonic acid leads to the generation of 4 hydroxynonenal that activates PPARδ and upregulates insulin secretion. Other studies assigned a regulatory role for endocannabinoids in beta cell function. We will investigate the mechanisms by which endocannabinoid biosynthesis is regulated in beta cells under nutrient overload stress.

Understanding the complex process of embryo implantation is a major goal of developmental biology. Such knowledge may also have important medical, social and economic implications, as 20-30% of all couples are temporarily (with 10% of them permanently) involuntarily childless. Of lost pregnancies, 75% are due to failure of implantation. Over the past several decades, it has become clear that shifts in different metabolic pathways determine the outcome of implantation, pointing to its regulation by a metabolic network.

Optimization of the metabolic environment to be favorable for embryo implantation is currently at the core of assisted conception programmes. However, despite intensive research, the pathways that are involved in implantation, and how they interact, are still poorly understood. Although no systemic overview for metabolic processes during implantation has been offered thus far, specific metabolic pathways have been suggested to be involved in embryo implantation including ovarian hormones signaling pathways, central carbon metabolism pathways, inflammatory signaling as well as lysophosphatidic acid signaling.

Importantly, a large volume of literature established an important role for the endocannabinoid system in the implantation of the mammalian embryo.

Advances in analytical chemistry and in bio-informatic software provide a means for the unbiased analysis of the metabolic processes by metabolomics: the profiling of the metabolome. The metabolome represents the collection of all metabolites in a biological sample. A systematic study of the unique chemical fingerprints that are the result of specific cellular processes will shed important new light on the process of embryo implantation.

­­­We are looking into the metabolism and specifically into endocannabinoid metabolism of the pre-implanted embryo using medium from In Vitro Fertilization of human embryos. We are also utilizing stem cell technologies to study the metabolic maturation of the implanted embryo, and developed a multi-cellular model for the examination of cellular metabolic interactions during implantation.

The effect of endocannabinoid receptors on receptiveness of the endometrium

Plasma AEA levels fluctuate with the natural menstrual cycle, with the highest levels during the follicular phase. Likewise, the expression and distribution of FAAH, NAPE-PLD, CB1 and CB2 in female reproductive tissues also vary with the menstrual cycle suggesting that the eCS expression is under hormonal control.

Implantation is the very early stage of pregnancy at which the blastocyst adheres and invades the wall of the uterus. The process of implantation implies a highly synchronized and complex bidirectional communication between the conceptus and the luminal endometrial cells, and it could be divided in three stages: apposition, adhesion and penetration.

The endocannabinoid system plays an important role during the process of implantation. Studies in mice have shown that a delicate balance between anandamide (AEA) synthesis (driven mainly by NAPE-PLD) and degradation (mainly by FAAH) is necessary to ensure an appropriate ‘AEA tone’ during implantation.

In our studies, we examine the role of the endocannabinoid receptors in patients with repeated implantation failure (RIF).

Are endocannabinoids involved in the creation of metastatic niche?

Endocannabinoids are produced in several peripheral tissues resulting in cell-type and location-specific profiles so that the eCB pattern in the tumor microenvironment depends on the tumor’s origin and site of primary growth and metastasis. Tumor growth is associated with an increase of 2-arachidonoylglycerol (2-AG) both at the site of the primary tumor and in plasma of the patients. It steadily increased over the course of cancer development and metastasis, suggesting that the growing tumor and circulating metastatic tumor cells secrete large amounts of 2-AG, sufficient enough to manifest in high plasma concentrations.

Treatment with exo- and endogenous cannabinoids reduced cancer growth in several rodent models and cell culture experiments, but CB2 expression of the tumor itself has been recently associated with poor prognosis in breast cancer.

In our studies we examine the effect of the endocannabinoid system on the early stages of metastatic spread, the formation of the metastatic niche.