The oral route, the most convenient mode for drug administration, has only limited use for important drugs from various pharmacological categories that have poor oral bio-availability such as some of the cannabinoids. Some of these drugs are characterized by a narrow absorption window (NAW) restricted to the upper part of the gastrointestinal (GI) tract due to the extended absorption properties present in that region of the small intestine (e.g., transporters for active absorption). In order to achieve prolonged absorption time that is required for a controlled release (CR) mode of administration of the cannabinoids, there is a need to enhance the gastric residence time (GRT) and begin the cannabinoid release process already in the stomach, thus extending the time of the absorption phase. The development of a cannabinoid gastro- retentive dosage form (C-GRDF) is a feasible way to further extend the GRT of drugs. 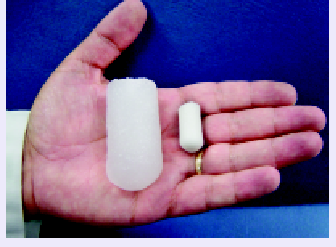 The main approaches examined thus far to produce extended GRT have been: low density GRDFs to cause buoyancy above gastric fluid: expandable GRDFs. These GRDFs are easily swallowed and reach a significantly larger size in the stomach due to swelling or unfolding processes that prolong their GRT. After drug release, their dimensions are minimized with subsequent evacuation from the stomach. In this project the focus is on expandable DDS where we have already found the initial condition for achieving gastroretentivity. We have to continue the search for the right polymer composition that would yield the desired release kinetics. Further investigation will deal with the incorporation of dissolution enhancers to the C-GRDF that would be required for solubilizing the lipophilic cannabinoid molecules. In addition to in-vitro release evaluation, we have previously developed a rat model that enables in-vivo evaluation of the gastroretentive dosage form (Stepensky D., Friedman M., Srour W., Raz I. and Hoffman A. (2001). Preclinical evaluation of pharmacokinetic-pharmacodynamic rationale for oral CR metformin formulation. J. Contr. Rel. 71:107-115) This animal model will enable us to expedite the development process, and thereafter to transfer it into clinical studies in human volunteers. This project will be conducted in collaboration with Prof. A. Hoffman.