| Effect of cannabis, cannabinoids-derivatives, on biofilms

Introduction: The activity of the cannabis plant extracts, synthetic and endo-cannabinoids derivatives is well documented in eukaryotic systems. However, very few studies have been published on the effect of cannabinoids on microorganism (e.g. bacteria or fungi) and none on their effect on biofilm formation or on microbe's cell-cell communication (quorum sensing).

Biofilm is the most abundant state in which microbes are found in nature. Most infectious diseases are associated with biofilms. Quorum sensing has been shown to regulate virulence factors pathogenesis, motility and biofilm formation. 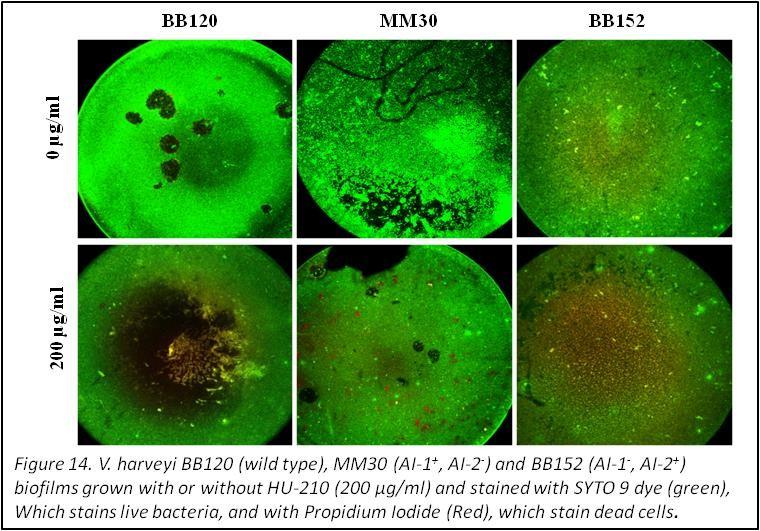 Innovative of the research: The aim of our research group is to investigate the effect of plant, synthetic and endo-cannabinoids on microorganisms.

Significance of the research: An insight into the mechanism of action of cannabis cannabinoids and endo-cannabinoids on microbes and open new understanding of potential cannabinoid-microbes interaction, which was hardly investigated.

More so, the exciting possibility that endo cannabinoids may have also present endogenous anti biofilm/anti quorum sensing activity is being examined. This will indicate a new line of defense of the human against bacterial invasion.

Administration of cannabinoids (that affect biofilm) together with antimicrobial agents may in the future open the door to \a possible tool to overcome bacterial resistance to antibiotics.

Results: Analysis of quorum sensing in wild-type and mutant strains of V. harveyi revealed that a cannabinoid derivative (HU-210) affects the quorum sensing cascade via auto inducer-2 (AI-2) pathway. Furthermore, this effect was correlated to biofilm formation and swimming motility of the bacteria that were significantly reduced in the presence of HU-210. HU-210 also altered the expression of genes which are associated with quorum sensing, specifically downregulating the genes of the AI-2 quorum sensing cascade. Preliminary results have also indicated that endo-cannabinoid (anandamide-ANA) has also an effect of bacteria at concentration less than MIC.

Conclusions: Are the cannabinoids the new era in repacking antibiotics and anti-fungal agents? According to our results, some cannabinoids derivatives do have an antibiofilm effect.

First evidence is provided in our study for interference of bacterial signal-transduction systems by a synthetic cannabinoid. Its effect via the AI-2 cascade (universal AI) opens a vast possibility of new mechanisms of action that have not been explored before. More so, our results opens new pharmaceutical avenues for the commercial use of derivative of cannabinoids for various, human related and non-human biofilms,